The Patricia Tretick Young Artist Competition provides an annual opportunity for talented young musicians to compete for cash prizes and a performance opportunity. Students prepare for months in advance and convene on the campus of Ball State University to perform in front of a panel of expert judges. The competition is open only to Indiana residents in grades 3-12 and undergraduate students enrolled in a college/university in Indiana. There are four divisions, each with its own cash prize and a performance opportunity: Elementary Division (grades 3-5), Ladonna Dingledine Junior Division (grades 6-8), Steve Dingledine Senior Division (grades 9-12), and Collegiate Division (undergraduate students at an Indiana college/university).

ANNOUNCING THE RESULTS OF THE 2023 PATRICIA TRETICK YOUNG ARTIST COMPETITION:

Congratulations to all the participants! Check back in fall 2023 for information about the 2024 competition, and please contact Dr. James Thompson at education@orchestraindiana.org or 765-216-0970 with any competition-related questions. 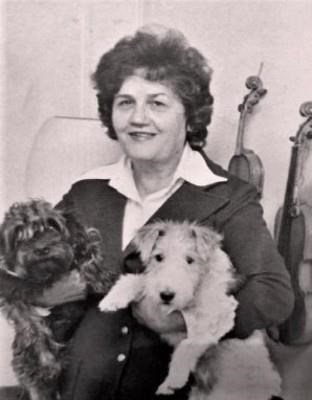 Patricia Stone Tretick’s most indelible mark was her teaching. So many violinists and violists came to her studio and emerged with solid skills and deep musical understanding. As a clinician and adjudicator her commentary was clear, on point but positive, encouraging. And then there were the thousands of Ball State freshmen who attended her famous Music Appreciation 101 lectures and found “Classical” music was not so mysterious, even enjoyable.

Patricia was born and grew up in Colorado, the daughter of Judge Clifford Stone, a chief negotiator of Western States water law, and Marjorie Snyder, a teacher of romance languages at the University of Colorado. Patricia began violin studies at an early age – she recalled taking a narrow gauge railroad trip on her own every six months from the family’s Gunnison home across the mountains to Colorado Springs for lessons, staying with her teacher and his family for a week each visit. She received her B.A. from Vassar College, and a subsequent M.Music from the University of Colorado in Boulder.

After college she joined the Denver Symphony, three years later moving to Phoenix to teach music at Phoenix Junior College and in the public schools. She auditioned for the Phoenix Symphony, and it was there she met her future husband, Sidney Tretick, who was Concertmaster and Associate Conductor of the orchestra at the time. The Treticks married in 1950 and two years later moved to Muncie, Indiana, Sidney having been appointed head of the String Department at Ball State’s School of Music. The couple had five children by 1961, and music lessons were mandatory for them all.

At the sudden death of her husband in 1962, Patricia took up the mantle of his duties at Ball State, teaching Violin, Viola, Music Appreciation, Stringed Instrument Repair, and continuing as a performer in the School’s Ars Musica String Quartet, all the while attending to raising her five children. Her performance activities were myriad: a soloist, recitalist, and Concertmaster or Principal in many orchestras in central Indiana. Summers found her in Colorado, performing in the Central City Opera Orchestra in the years when that festival was the off-season home of the New York Metropolitan Opera. After her retirement from Ball State in 1993, she moved back to Phoenix.

As a mentor and pedagogue, Patricia was committed to fostering musical interest and excellence in her students. Orchestra Indiana’s Young Artist Competition is now renamed in honor of her incredible legacy, and the Tretick family is establishing a memorial fund to support the competition in perpetuity.

To learn more about the renaming of the competition, read our news release.

To donate to the memorial fund, please visit our “Give Now” page.