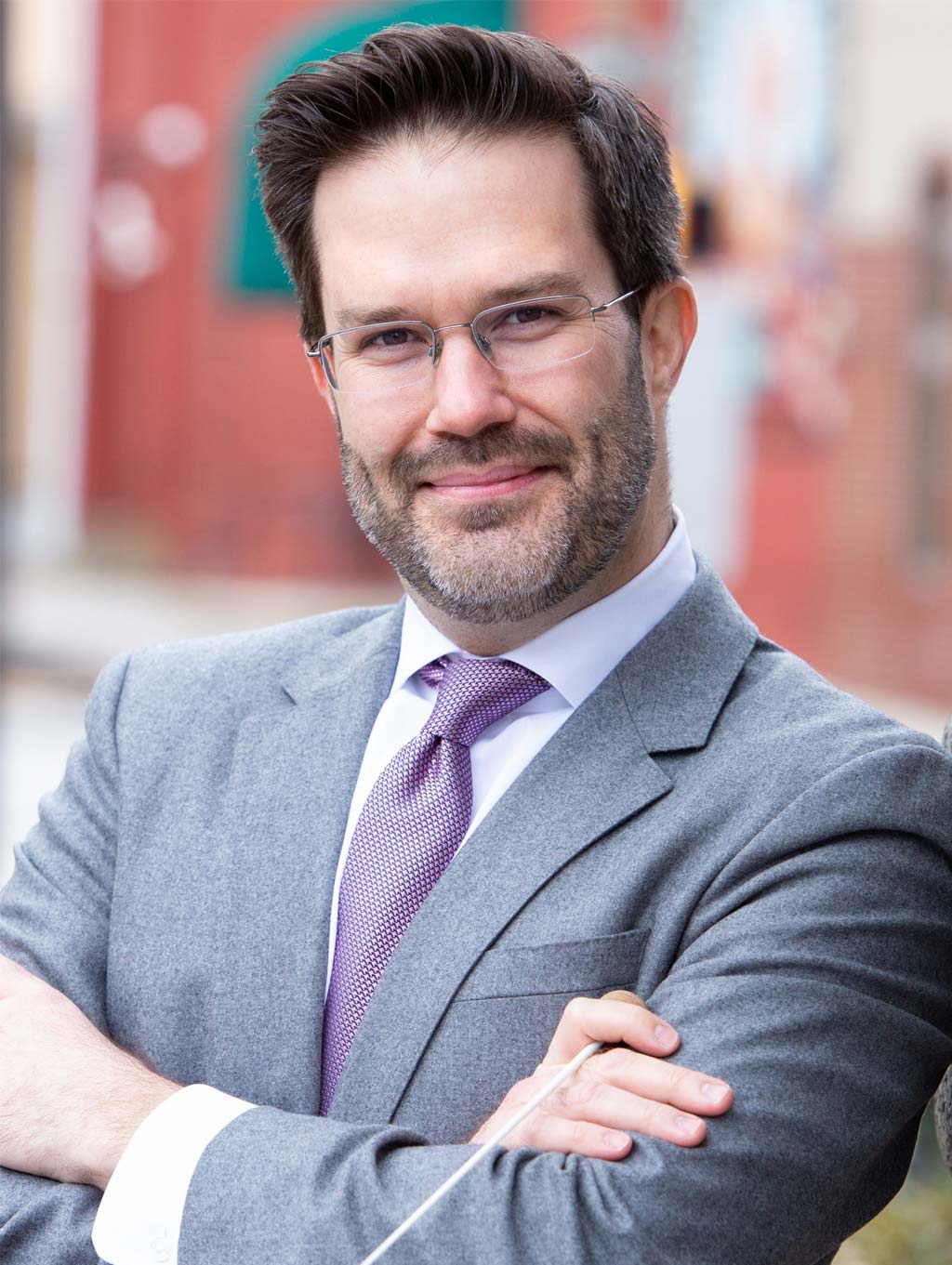 Recognized for his “musical sensitivity” and “energized sense of interpretation”, Matthew Kraemer is quickly making his mark among young American conductors for his inspired performances and versatility.  The Buffalo News notes, “He presents a tall, dignified and stately podium presence with a quite clear beat, a good sense of shaping melodic lines, and an all business attitude that focused on the music without any histrionics.”  Kraemer was appointed Music Director and Principal Conductor of the Indianapolis Chamber Orchestra in 2015 and has extended his commitment with the ICO through 2023.  He additionally serves as Music Director of the Butler County Symphony (PA), the Marion Philharmonic (IN), and recently assumed the role of Artistic Advisor of the Orchestra Indiana.  His active guest conducting schedule includes appearances with many of the nation’s finest orchestras, including the Atlanta, Baltimore, Cincinnati, Columbus, Houston, Indianapolis, Jacksonville, Nashville, North Carolina, Saint Louis, Spokane, Syracuse, and Toledo symphony orchestras, as well as Canada’s Mississauga Symphony, Niagara Symphony, and Hamilton Philharmonic and in Europe with the Vidin Philharmonic and the Orquesta de Cadaqués.  Upcoming highlights include performances with Tessa Lark, Richard Lin, Norman Krieger, Nicholas Canellakis, Sterling Elliott, the PRISM Quartet, and Dance Kaleidoscope.  Future guest conducting engagements include the Arkansas Symphony, Orchestra Indiana, Toledo Symphony, Virginia Symphony, West Michigan Symphony, Louisiana Philharmonic, and Rochester Philharmonic.

Kraemer served as associate conductor of the Buffalo Philharmonic from 2009 to 2014, where he regularly led the orchestra in each of its concert series.  A passionate advocate for new music, he has performed the works of many living composers during his career and has led the American Composers Orchestra’s EarShot readings with several orchestras.  The ICO was awarded a Virginia B. Toulmin commission for emerging women composers under his leadership.  Kraemer served as Music Director of the Erie Chamber Orchestra (2012-2017) and associate conductor of the Virginia Symphony Orchestra (2007-2010).

Increasingly recognized for his committed advocacy of music education and his devotion to young audiences, he currently serves on the faculty at New England Music Camp, where he conducts the symphony orchestra and teaches chamber music.  The Buffalo Philharmonic’s award-winning education concerts grew exponentially under his leadership, expanding to reach over 40,000 students throughout western New York.  He played an integral role in the creation of the orchestra’s successful live broadcast concerts with Time Warner Cable, as well as implementing new collaborations with many organizations in the Buffalo community.  His performances are broadcast regularly on NPR’s Performance Today.

An Indiana native, Kraemer studied conducting in Vienna, Austria with Salvador Mas Conde and was twice a fellowship conductor at the American Academy of Conducting at Aspen.  He has additionally participated in the National Arts Center Conductor’s Program in Ottawa, Canada.  His conducting teachers include David Zinman, Robert Spano, Stanley DeRusha, and Jorma Panula.  Kraemer is a graduate of Butler University and the University of Nevada, where he assisted former Cincinnati Symphony concertmaster Phillip Ruder. An accomplished violinist, he was a member of the Nightingale String Quartet.  His principal violin teachers include Phillip Ruder, Herbert Greenberg, and Larry Shapiro.  When he is not performing, Kraemer enjoys cooking, running, and reading.   He and his wife, Megan, reside in Indianapolis with their sons Gabriel and Nathaniel.